CARSON CITY — With blessings delivered in the native languages of the Paiute, Western Shoshone and Washoe tribes, a new chapter in story of Stewart Indian School commenced on Wednesday.

More than 250 people, including Nevada Gov. Brian Sandoval, dozens of alumni and leaders from several Nevada tribes, attended the blessing ceremony for the Stewart Indian School Cultural Center and Museum – part of a $4.5-million appropriation approved during the 2017 Nevada legislative session.

The 7,100-square foot museum is scheduled to open in the spring of 2019. It will occupy the school’s former administration building and its purpose it to tell the unvarnished history of the school, which opened in 1890 with 37 students from the Washoe, Paiute and Shoshone tribes.

By the time the school closed in 1980, more than 30,000 Native American students from around the country had attended Stewart.

Blessings were given Wednesday by Dinah Pete of the Washoe Tribe of Nevada and California, Burns of the Pyramid Lake Paiute Tribe and Reg Soap of the Duck Valley Shoshone-Paiute Tribe.

The original purpose of the school was to train and educate Indian children with the ultimate goal of assimilation, stripping them of their native traditions and language. The purpose eventually shifted from vocational training to academics in the 1960s. Multiple generations of tribal families attended the school and feelings about the school are mixed.

The State of Nevada has owned the 240-acre Stewart campus since the 1990s. Sandoval said he made funding the museum a priority in his budget because preserving the history of the school is important.

Sherry Rupert, executive director of the Nevada Indian Commission, said the museum and cultural center offer a new beginning to the campus. Long-term plans include rehabilitating many of the more than 60 distinctive stone buildings on the campus, making them available for use as places of learning about tribal culture and arts.

The first-phase construction project also includes turning the former post office near the cultural center into a welcome center for the campus.

In the first photo: Dinah Pete of the Washoe Tribe of Nevada and California delivers a blessing for the construction of the Stewart Indian School Cultural Center and Museum, which is expected to be opening in the spring of 2019. Behind her is Nevada Gov. Brian Sandoval. Also pictured is Nevada Indian Commission Chairman Richard Arnold. 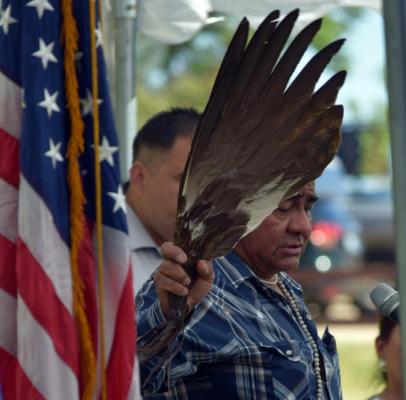 Reg Soap of the Duck Valley Shoshone-Paiute Indian Tribe delivers a blessing for the construction of the Stewart Indian School Cultural Center and Museum, which is expected to be opening in the spring of 2019.